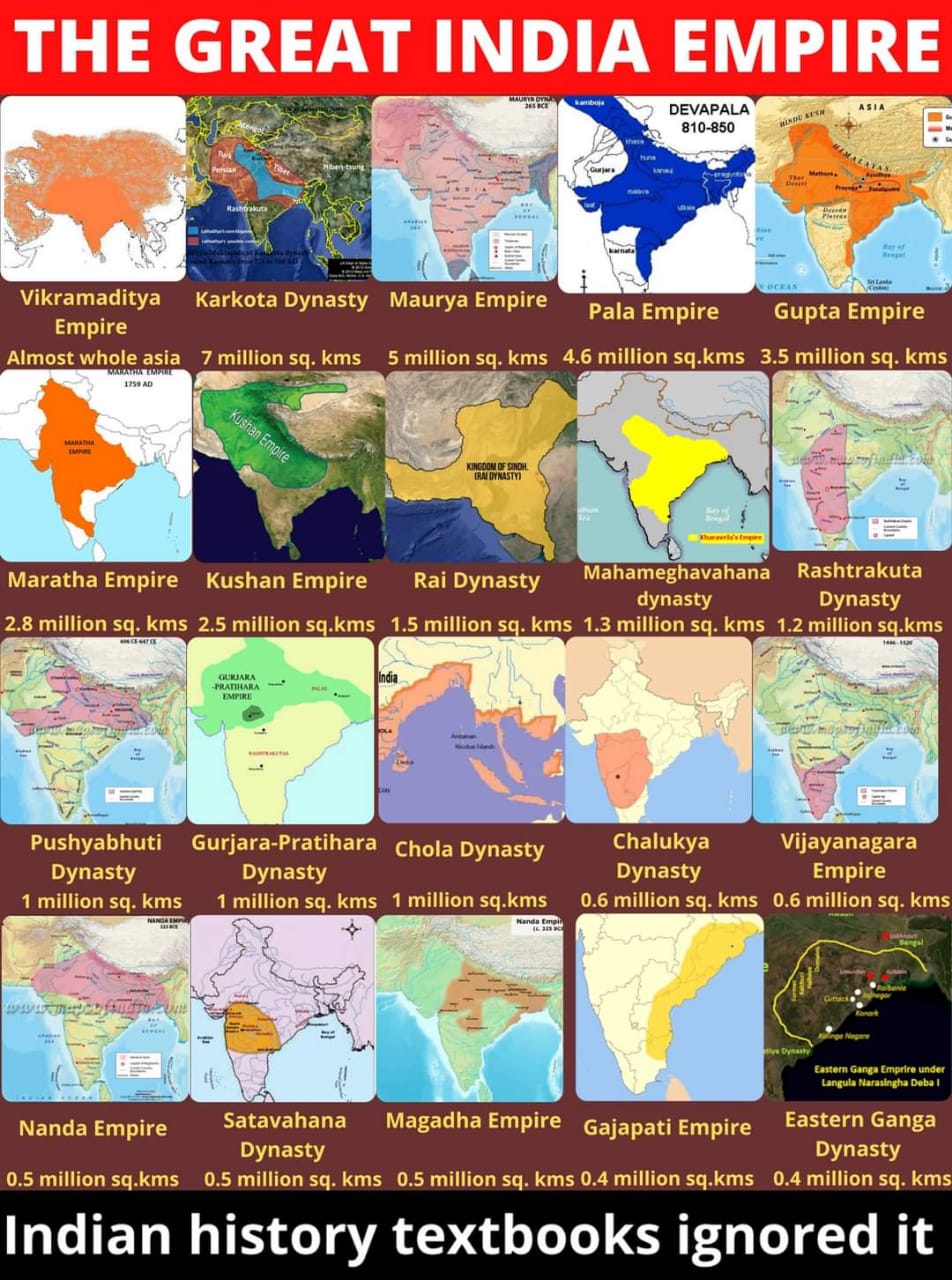 NOTE : This king not from Gupta Empire and Chalukya dynasty because 14 kings in India named as Vikramaditya after seeing his power and achievement .

Karkota dynasty ruled  over 7 million sq. kms. Parihaspur  was built by Lalitaditya Muktapida and served as the capital of Kashmir during his reign. Durlabhvardhana was the founder of the Karkota dynasty. The Undefeated Ruler of Kashmir who defeated Islamic invaders & ruled till Caspian Sea  .He captured parts of Central Asia and North india. His empire extended from Tibet to Iran and Turkistan. He was later able to create an empire based on Kashmir and covering most of Northern India and Central Asia including most parts of Pakistan, Afghanistan, Bactria , Iran, Nepal,Tibet, Turkistan and Soghdiana.  Lalitaditya Muktapida only one king from Karkota dynasty who expanded the Karkota dynasty

Pala Empire size is  4.6 million sq.kms . Pala Empire  covered part of Afghanistan ,Bangladesh , India, Nepal and Pakistan . They  have  capital city  which was  Bikrampur, Pataliputra  , Gauda,  Monghyr  and Somapura .Pala Empire empire stretched from Assam and Utkala in the east ,Kamboja (modern day Afghanistan) in the north-west and Deccan in the south.  Gopala  who is founded the Pala Empire and  Deva Pala who Extent of Pala Empire .

Gupta empire  size is   3.5 million sq.kms . They  have  permanent  capital city  which was Pataliputra, in present-day Bihar. Chandra Gupta I was founded the Gupta empire  and Gupta empire  region extended from the Himalayas in the north to the Krishna and Godavari Rivers in the south; and from Balkh (Afghanistan) in the west to Brahmaputra River in the east. Gupta empire  covered  part of India ,Pakistan, Bangladesh  ,Myanmar and Nepal . Samudragupta  only this  king from Gupta empire Who expanded the Gupta Empire

Maratha Empire size is 2.8 million sq. kms. Chhatrapati Shivaji Maharaj was founder and first emperor  of the Maratha Empire.  Maratha Empire extending from Bengal in the east to Attock and Sindh in the west, Kashmir in the north to the Kaveri basin in the south.  The capital city is Raigad, Jinji, Satara and  Pune in present-day Maharashtra. Chhatrapati  Shivaji and Bajirao  this two king from Maratha Empire who expanded the maratha empire

Kushan Empire area is  2.5 million sq. kms. Kujula Kadphises was founded of Kushan Empire. The Kushan Empire, a realm that covered much of present-day India, Pakistan, Afghanistan and China(Yarkand now in the xinjiang region of china). Kushan Empire  ruled over most of the northern Indian subcontinent and parts of Central Asia. The capital city of this empire was  Peshawar (Pakistan) , Bagram (Afghanistan) , Taxila (Pakistan)  and Mathura (Uttar Pradesh, India). Vima Kadphises   and Kanishka I this two king from Kushan Empire who expanded the Kushan Empire.

Rai dynasty area size is 1.5 million sq. kms  .Adi Rai was founded of Rai dynasty and capital city is Arror (Pakistan)    . Rai dynasty extended from Kashmir in the east, Makran and Debal port (modern Karachi) in the west, Surat port in the south, and the Kandahar, Sulaiman, Ferdan and Kikanan hills in the north. Rai Diwa ji (Devaditya)  only one king from Rai dynasty who expanded the Rai dynasty.

Chalukya dynasty area size is  0.6 million sq. kms  .They  have permanent  capital city is Badami in present-day Karnataka.   Chalukya dynasty extended from the Kosala and Kalinga (Bay of Bengal) in the east, to Konkana in the west, the river Narmada in the north and up to river Cauveri in the south. Their domain included the whole of present day Karnataka, Maharashtra, parts of Gujarat, Madhya Pradesh, Odisha, Andhra Pradesh and parts of Tamil Nadu. Pulakeshin II only one king from Chalukya dynasty who expanded the  Chalukya dynasty

Magadha Empire area size is  0.5  million sq. kms  .Magadha Empire was bounded on the north by the river Ganges, on the east by the river Champa, on the south by the Chota Nagpur Plateau, and on the west by the Son River. Jarasandha  was  founded the Magadha empire. They are  capital city is Rajgir in present-day Bihar and another capital city is Patna Rajgir in present-day Bihar

Gajapati Empire area size is  0.4  million sq. kms . The Gajapatis were ruled over Kalinga (the present day Odisha), large parts of Andhra Pradesh and West Bengal, and the eastern and central parts of Madhya Pradesh and the southern parts of Bihar. Gajapatis became an empire stretching from the lower Ganga in the north to the Kaveri in the south. Kapilendra Deva  was the founder of Gajapati dynasty.  They have  permanent    capital city  of which was Cuttack the present day Odisha.

Eastern Ganga dynasty area size is  0.4  million sq. kms   .Eastern Ganga dynasty  consisted of the whole of the modern-day Indian state of Odisha as well as major parts of West Bengal, Andhra Pradesh and Chhattisgarh.[3] The early rulers of the dynasty ruled from Dantapuram; the capital was later moved to Kalinganagara (modern Mukhalingam), and ultimately to Kataka (modern Cuttack).

NOTE : Several empires in INDIA history have been contenders for the largest of all time, depending on definition and mode of measurement. Possible ways of measuring size include area, population, economy, and power. The list is not exhaustive owing to a lack of available data for several empires; for this reason and because of the inherent uncertainty in the area estimates, no rankings are given.